See You In Hell - Útok CD 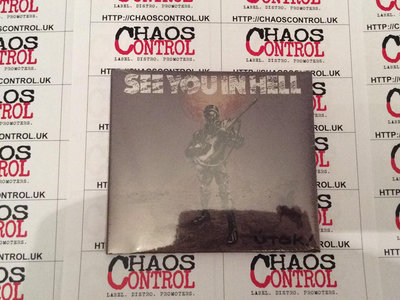 "Very cool old school sounding Czech hardcore punk, which brings to mind a lot of old US and European hardcore influences. SEE YOU IN HELL is fairly straight-forward, no-frills stuff and won’t throw you a curve ball stylistically, which in my book can be something very good. Sometimes you want your hardcore served up raw and that’s when you listen to SEE YOU IN HELL”
(NM, Maximum RocknRoll #299)

"Another in a long line of high energy releases from Czech Republic’s SEE YOU IN HELL. Eight songs of everything that makes you to love them: speed, agility, hooks and near cryptic lyrics that challenge you to question everything that goes on around you while giving you the feeling that everything could be alright if we apply ourselves. The lyrics are printed in English and are accompanied by a collage of b/w show flyers. If this is your first time reading P.E. you should get ahold of issue 52/53 and check out the SEE YOU IN HELL Japanese tour diary. These guys are awesome!"
{PROFANE EXISTENCE issue 55, December 2007}

"SEE YOU IN HELL have been going for quite some time now and despite not blowing me away completely with their earliest stuff I was still hooked on the band and wanted more. When they brought their noise to the big format in the shape of "Umet se Prodat" I knew I would get all the records from this band as long as they kept them coming. Now, after some time of silence as far as records go they once again deliver their noise through the big format. Since the last one the band has been on a number of tours so despite not releasing anything new since 2005 they've been real active. During this they've also altered their sound a bit, probably inspired by their countless live performances. The prominent Japanese hardcore influences are more or less gone and SEE YOU IN HELL does sound a lot more Czech, perhaps with some old Italian influences thrown in for good measures.

The sound is a lot rawer and feels like they wanted to lay it down like they sound live - hard, rough, energetic, and honest. I like this, but I must say I wasn't too impressed at first as I missed the sound they had on the "Umet se Prodat" LP and were afraid the band had gone in an opposite direction to what I had hoped. I still claim they went in this "wrong" direction, but at the same time I'll gladly admit that it was I who was wrong - this band can take any direction it pleases and still present one hell of a record. For as far as I've been into hardcore punk raw has been what I'm looking for, and everything about this record is raw; the roaring vocals, sharp guitar riffs and equally as sharp leads, a rumbling bass, and some frantic battering to tie it all together. I really do hope I will meet up with this lot in hell!"
[Krogh - (www.attackfanzine.net, November 2007)
"I guess SEE YOU IN HELL (= more or less former MRTVA BUDOUCNOST) are not born to frustrate me because like their “Split kazeta” split tape w/HOMO CONSUMENS, the split 7”es w/MINDLOCK (01), MASSGENOCIDE PROCESS (05) and THE PUBLIC (03) and the “Umet se prodat (Market Yourself)” 12” (04, this brand-new 12” is the shit. You know, there’re a truckload of spanking bands within the Eastern European countries, but SEE YOU IN HELL are amongst the finest. On “Útok!” (= “Attack!”) this quartet out of the Czech Republic focuses on quicker paced, muscular, every now and then harmonious, but always exceedingly pissed off, massive hardcore/punk with even more pissed off singing parts. Ha, I believe these guys have a ton of classic Japanese records within their collection - always a good sign! In spite of everything, this 12”, which resides in a vast gatefold sleeve, is a modern day masterpiece!"
(Loser - Short, Fast And Loud zine issue 18)

ships out within 5 days
2 remaining