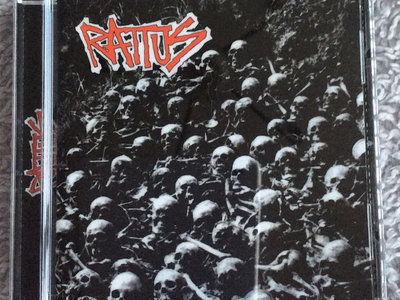 Formed in 1978, the RATTUS, is recognized as one of the finest icons of Finnish punk - along with Kaaos and Terveet Kädet - brought a particular and special renown to the sub-genre. Recorded in December 1983 (later released in 1984), Rattus "self-titled" with the band's own name was originally released in the US and UK by legendary record label Ratcage Records (responsible for introducing names like the Beastie Boys and Agnostic Front to the World).

This has greatly helped Finnish punk rock's still small setting for underground cult status around the world, gaining the attention of artists like Pushead (who designed the cover of their next album) or the punk rock bible, Maximum Rock 'n 'Roll magazine.

This album consists of 18 tracks in total, containing older rewritten sounds, along with a bunch of newly conceived violent outbursts, all in their Finnish mother tongue. In celebration of this great exclusive release Criminal Attack Records, the album has been completely remastered, and also has a poster format containing all the lyrics, photos and posters of shows of the time. Required item for any early Punk Hardcore collector !!

ships out within 5 days
3 remaining