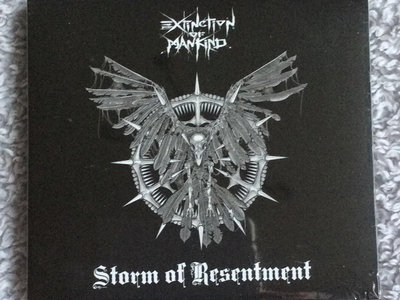 British punk veterans EXTINCTION OF MANKIND release their newest album titled "Storm Of Resentment". The band started in 1992, and they are one of the few who are true to what British punk has always been. They are the natural continuity of the UK Anarco Crust Punk movement started in the late 1980s influenced by bands such as ANTISECT, AMEBIX or AXEGRINDER.

"Storm Of Resentment" is the anarch punk concentration of the United Kingdom. Take the best of it (the lyrics, the testimonials, the sound, the beat, the anger and the dedication) and add thrash guitars to the last one. EXTINCTION OF MANKIND proves that you don't have to play too fast to be brutal.

The introduction of "Cash Cow" Slowly takes you to the disc with your initial 2-minute intro with a destructive and contagious sound that makes you want more and more! And you will get so much more! MetalPunk, Crust and Pinches of Thrash Metal! This is a true crust masterpiece, compared to the album "Baptized In Shit" (1995), if not better! All album art was done by Duncan Macpherson.

ships out within 5 days
4 remaining