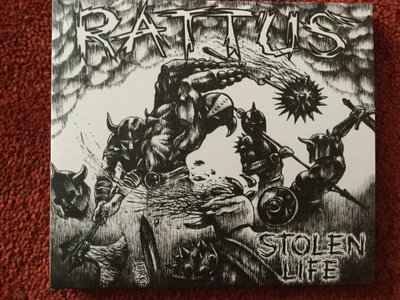 Special and commemorative reissue of the 30th anniversary of the album "Stolen Life" by Finnish hardcore legend RATTUS !

For the first time officially on CD, a luxury 3-panel digipack version containing photos and posters of the time, lyrics, a brief band text on the disc, a poster insert with the cover of the French version, and a completely exclusive cover for this album. special edition by brasuca 1BERTO ( TERVEET KÄDET, SICK TERROR, SOCIAL CHAOS, ULSTER, ...).

In addition, the recording has been completely remastered. Influenced by bands like Anthrax, Slayer and Venom , and with the motto "We can do anything we want" , the RATTUS They recorded the album "Stolen Life" in 1986, which was originally released in 87 by the French label Neg. Fx Records , and 88 by the Brazilian label New Face Records . T

ships out within 5 days
2 remaining